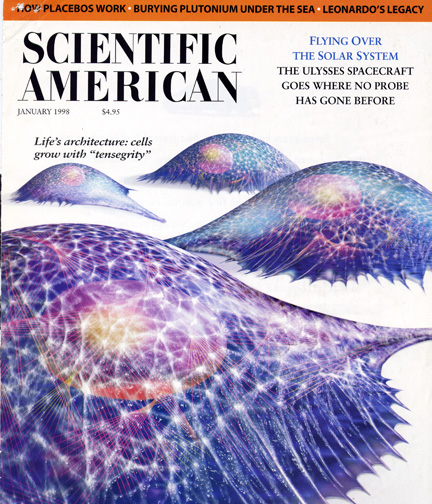 A while back a friend and I were talking about cancer. He’s a long-term survivor and has groups for people with cancer.  As a medical scientist who did  cancer research for years (funded by NIH, ACS) I like to learn about people’s healing experiences.  He told me the one common factor in the folks who went into remission, who ‘shouldn’t have’ – they let go of something big.

Current scientific research indicates that, at least in the petri dish, the amount of mechanical tension on cells – stretching or releasing – effects which genetic program is expressed. When breast cells are grown on rigid surfaces, they express cancer genes; when grown on rubbery flexible surfaces, no cancer genes are turned on.

Most cells have genes that tell them to divide, mature or die.  They can only use one set at a time.  Reproduce, and they can’t mature.  Mature, and they don’t make any more copies of themselves.

How this manifests in the petri dish – when cells are attached and stretched on the surface, they make more cells to fill the dish.  When they fill the dish or resources diminish, some of the cells let go of some of the attachments (cellular Buddhism?) and mature.  They stop dividing and take on new gene activities.  Finally the third phase of a cell’s life is to fully let go of attachments. Fully letting go turns on another gene –  cell death, a gentle process.

So in the cancer scenario, I wondered if the ‘letting go’ of something big emotionally initiated in the cancer cells to turn on their letting go to death genes.

What do we need to let go of?  Do we even know?  Well, letting go can be a physical process, like deep stretching, working out with intention, massage. Anything that changes the fabric of the body, our cells, must change how the cells function.

To me, this says, doing physical practices like yoga, tai chi, qigong self-massage, chanting, are all ways that relax our cells and can effect what happens all the way down to our genes.

Some of the most exciting research in this area comes from pioneer DR. DONALD INGBER at Harvard University whose now looking at breast cancer based on what’s called the tensegrity of the cell. Here is another link to INGBER’S exceptional work where he heads up the Wyss Institute at Harvard.

Above image with permission from Slimfilms.com. The image shows the fabric of the cell, the stretched strings and gives a great view of what’s called the cytoskeleton which most likely holds keys to the TRUE INTELLIGENCE of the cell.

Scientist-photographer author and teacher bringing together science, art and sometimes the sacred. PhD biochemist, post-doc in immunology and years of teaching mindbody health and sensory awareness. Looking within with a microscope my vision of the world has changed, yours might, too.