When I was first trying to ‘brand’ what I do, I called my work “Mystic Molecules.” And one of the reasons,  I considered molecules as mystical – their geometric shapes reflected many symbols different cultures held as sacred.  I also interpreted that their shapes told a story of molecular creation and divine design. After all there must be principles of design that determine how our cells are built  from molecules, molecules must fit one another, they create numerous forms.

Why such a bizarre word combination? Well, it’s a bit like my perspective. Molecules, of course, refers to science and our chemical makeup. Mystic refers to the artistic, metaphysical, symbolic, mysterious, and even, the sacred.

When I began photographing molecules under the microscope, I was doing it for two reasons, for the art, and to teach kids how their bodies worked.  And what I saw early on, children no matter their age (3-18) seems to be intrigued or mesmerized by these photos of inner space.  I didn’t have to name what they were seeing.  Even under very stressful circumstances – waiting for chemotherapy – they were quiet taking it all in.  I simply wanted to entertain these children with cancer since I didn’t know what else to do for them.  After all, I was a biochemist making the science of our invisible cells more tangible by developing diagnostic tools for human leukemias.    Yet the more I got INTO the microscopic domain, the more other worldly stories I envisioned – that molecules weren’t only about science.  They could, should you be so inclined, be interpreted in other ways. 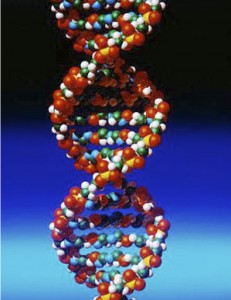 DNA, is a legendary molecule that encodes our genetic inheritance.  And the shape of this wondrous molecule is a spiraling staircase long enough, if unwound, to reach to the moon and back at least 60 times.  Maybe even more. 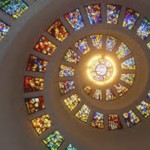 The spiral shape is ubiquitous as a sacred symbol to many traditions.  And in nature, the spiral is characteristic of  flow, growth and transformation.  And so as I traversed the worlds of the medical scientist and the artist shaman, I began merging both strands of information – hence, mystic molecules.

Like all existence on the descending scale of realities, the spiral is a symbol.  It denotes eternity, since it may go on forever… This order, reverberating down into the microscopic and subatomic levels, both structures and reflects our consciousness. 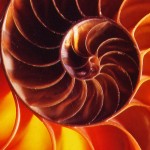 And so we see the SPIRAL everywhere in the universe – in biology how plants and sea shells grow; in cosmology the way galaxies form, and at the micro level, our DNA, some of our proteins, and who knows where else. So here I  will occasionally offer glimpses into the worlds where molecules, art and mystery coexist to open your consciousness to the deeper wonder of all that we are.  That our molecules carry beauty, spirit and wisdom beyond their physiological function – at least that’s a beginning of the story of Mystic Molecules. 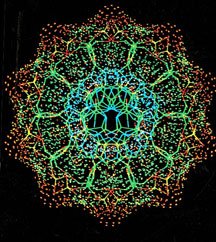 DNA is represented in several different ways on this page.

At the very top, is a photomicrograph of molecules of DNA.

Next  is a model of the molecule in which each color ball represents a different atomic element.  DNA is made of the elements of carbon, oxygen, nitrogen and phosphorus.

The next photograph is a cave wall pictograph (Palatki ruins outside Sedona, AZ)which I interpret as DNA.

And this last image is a computer graphic of the crystalline structure of DNA as viewed from the top of the molecule – constructed by Professor Robert Langridge at UCSF, former director of Computer Graphics Lab

Begin to see ART in Science, the sacred mysterious in our molecules.

And in  terms of sacred geometry.  Life doesn’t happen until we have hexagons. Molecules whose structure is hexagonal are essential and probably a prerequisite for life.