How did 12 Mineral Salts Become Associated with the 4 Elements?

The Zodiac and the Body 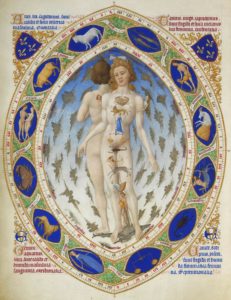 It was an ancient Roman text, The Astronomican that was the first written mention of the human body being related to astrology. Each sign of the Zodiac corresponded to a part of the body. Starting with the first sign, Aries, which was said to rule the head down to the last sign Pisces that ruled the feet.

Contributions by the ancient Greek physician Hippocrates and later physician-alchemist Paracelsus in the 16th century added that the external world corresponded to the various parts of the internal world, as above so below. Believers in astrology looked at the sun and planets to understand health and personalities. 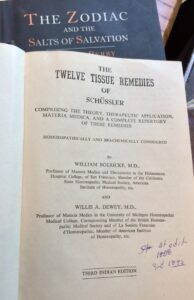 The 19th century brought homeopathic medicine into the picture.  Homeopathy looks at health and illness as a reflection of balance one’s vital life force or energy.  German physician, William Schuessler began investigating the role of minerals in human health. He believed that disease resulted from an imbalance of the minerals.  His ideas were influenced by another great 19th century scientist Virchow, who believed that the human body was a collection of invisible cells and that illness resulted from a breakdown of the individual cells. Schuessler, combining Virchow’s cellular theory and his mineral theory set about to isolate minerals from the tissues/cells of the human body. Getting ashy human remains, he detected 12 minerals salts, which he called “cell or tissue salts.”  These tissue salts were then brought into the homeopathic repertoire. 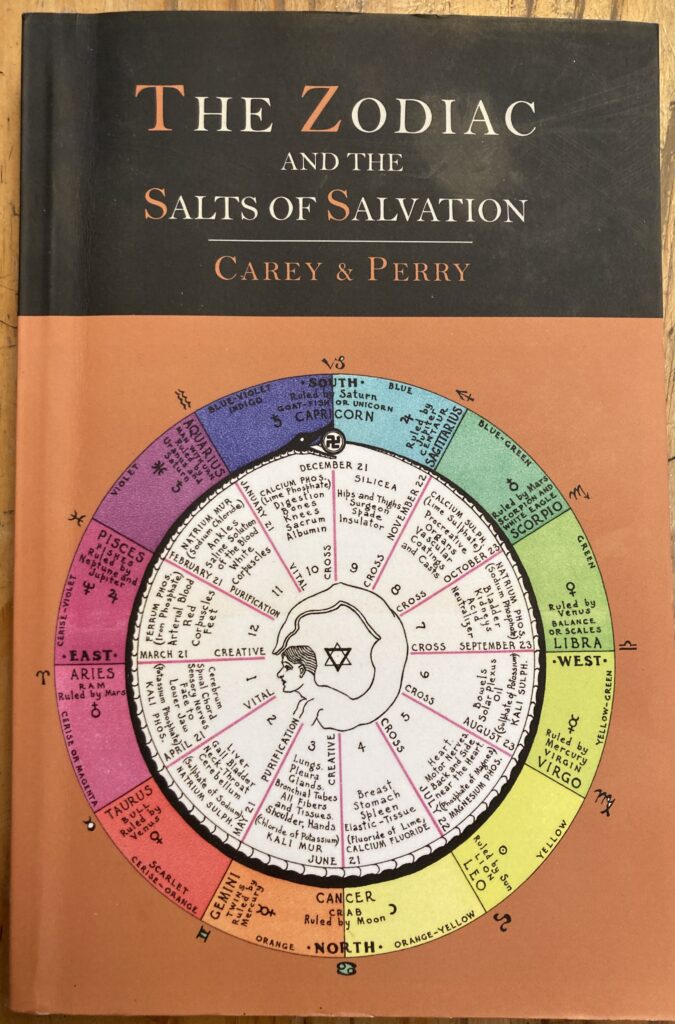 Building on the work of Schuessler, physician-biochemist Dr. George Washington Carey, in early 20th century developed modern astrological medicine. Trained in homeopathy, biochemistry, astrology, and religion, Carey ascribed each of the 12 cell salts to a sign of the Zodiac and called these Salts of Salvation. These mineral salts have been used as homeopathic cell salts and as part of astrological medicine.

Choice of salt to body part links back to the ancient body map and the Zodiac and later substantiated by linguistic and alchemical evidence. Soon, based on their spiritual guidance, Carey and Isadora Perry expanded astrological cell salts beyond the physical stating that homeopathic cell salts could be used to raise consciousness to a higher spiritual and emotional plane.

Tissue or cells salts have been used as part of homeopathy and astrological medicine for about a century. 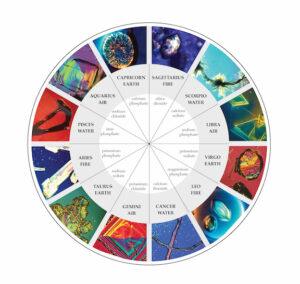 Now I, a biochemist and medical scientist come into the picture in the late 1970s.  I had been using the microscope to learn about human white blood cells to be able to distinguish normal cells from leukemia cells (cancer of the white cells) So it was with great reluctance that I agreed to photograph with my microscope these mineral salts said to be associated with astrology.  I received the12 pure mineral salts, not homeopathic preparations. After completing the photography I detected a surprising pattern of 4 predominant shapes.  Ever the researcher, I questioned whether there was any category of 4 in astrology.  There was —  the 4 elements.  To my shock the shapes distributed themselves according to the 4 elements of air, water, fire and earth!  Minerals associated with the earth element were rounded, air mineral salts were square or rectangular, water minerals were wavy, and the fire sign minerals were hexagonal.

How was this possible — that the microscopic view of a mineral fit perfectly into its symbolic relationship to its element? Could I have uncovered, through scientific technology, a link between ancient mythology and modern biology? Not an easy idea for this mainstream academic scientist to think about.  Yet as I delved more into the symbols of the Zodiac, these microscopic forms also conformed to other ancient metaphysical elemental concepts and to their physical forms in nature.  And though I was a skeptic and knew NOTHING  about astrology when I did the photography, the images intrigued me and I  began this decades-long exploration of the elements of life, what can they teach and show us.  Can this symbol system be used to access deeper wisdom within to know ourselves and life better?

How my photographs were taken.

At the time, I was a research scientist on the faculty at the University of California Medical School, Taking a break from my lab one day I walked down to Golden Gate Park, went into the science museum and saw an art exhibit of chemicals of the brain taken with the same kind of microscope I used for my cancer research. My life changed forever from taking that break. From shelves in my lab I began photographing molecules of life, like adrenaline, vitamin C, histamine and finding amazing beauty.  Later I photographed the 12 mineral salts through my Olympus Interference Microscope using 35 mm slide film. The colors come from refraction of the white light through 2 prisms on the microscope.  I say I am painting with light.  Of course since those early days I have captured the art and beauty in numerous substances like wine, CBD, LSD and even plants, herbs and soup. 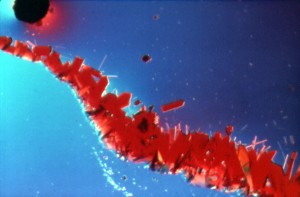 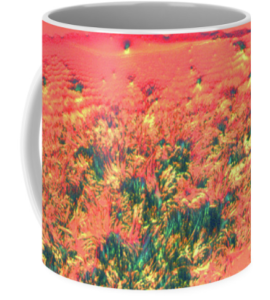 If you want to learn more about potential  benefits from these elements,   I offer personal ELEMENTAL GUIDANCE readings, courses and  random posts.

AN Elemental Course – GETTING TO YES